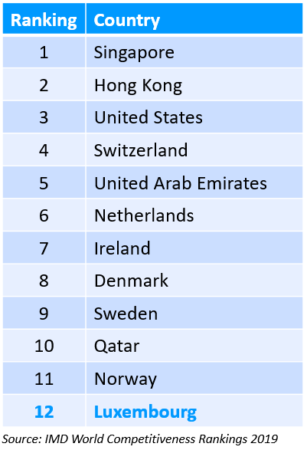 The IMD World Competitiveness Ranking incorporates 235 indicators taking into account a wide range of “hard” statistics such as unemployment, GDP and government spending on health and education as well as “soft” data from an Executive Opinion Survey covering topics such as social cohesion, globalisation and corruption. This information feeds into four categories – economic performance, infrastructure, government efficiency and business efficiency – to give a final score for each country.

Singapore is ranked as the world’s most competitive economy in the 2019 edition of the ranking, followed by Hong Kong, the United States, Switzerland and the United Arab Emirates.

Luxembourg features in 12th place among the 63 ranked economies. Although the country loses one place compared to 2018, it still remains among the best performers.

Luxembourg ranks particularly highly in the category economic performance, where it is in 4th place due to its good results in indicators such as international trade and international investments.

The country considerably improved its performance in terms of government efficiency and moved from place 17 in 2018 to place 10 this year. The positive evolution is mainly due to the low salary differences between men and women and a decreasing disparity of revenues among residents.

Luxembourg ranks 12th for business efficiency and 25th for infrastructure.

According to the IMD study, Luxembourg’s five main “key attractiveness indicators” are the following: