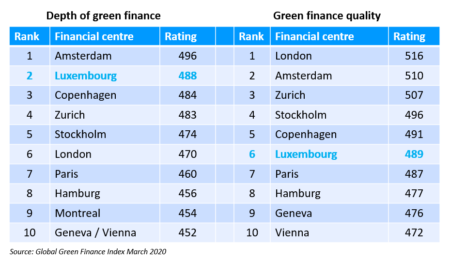 In the GGFI edition published in March 2020, Amsterdam is considered as the world leader in terms of the depth of green financing, with Luxembourg in 2nd place and Copenhagen in 3rd. Luxembourg improved its rating quite considerably compared to the previous edition and retains its 2nd place.

London comes out on top in the green finance quality ranking, followed by Amsterdam, Zurich, Stockholm and Copenhagen. Luxembourg ranks 6th, up one place compared to last year. The country gained 24 points in the rating.

If the depth and quality ratings are combined, Luxembourg ranks 4th internationally after Amsterdam, Zurich and London.

Z/Yen comments that there is a growing confidence in the development of green finance across all regions, with almost all financial centres receiving increased ratings. The index is strongly dominated by financial centres in Western Europe, a fact that according to Z/Yen “reflects the continuing work being undertaken by European financial institutions, central banks, regulators, and the European Union to embed sustainability in their regulatory work”.

The GGFI is built on criteria divided into four main areas of competitiveness:

In addition, Luxembourg ranks 3rd in the field of business and 6th in infrastructure.