Coronavirus bailouts: Luxembourg among the most generous 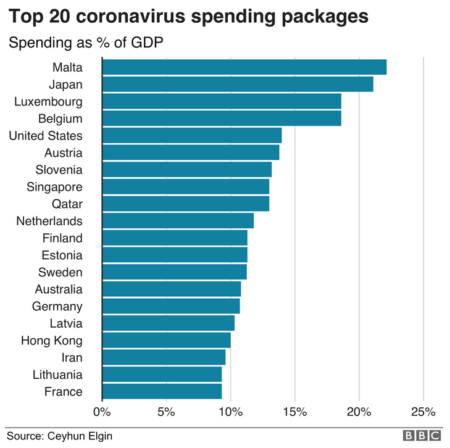 Luxembourg’s economic stabilisation programme is one of the many coronavirus rescue packages put in place by national governments to counteract the economic effects of the COVID-19 pandemic. In the article “Coronavirus bailouts: Which country has the most generous deal?“, the BBC analyses and compares national measures.

The BBC quotes Columbia economics professor Ceyhun Elgin, who has been working with colleagues around the globe to analyse the response in 166 countries. Luxembourg’s extensive economic stabilisation programme places the country in 3rd place in the world in Professor Elgin’s calculations of spending as part of GDP, after Malta and Japan. However, the BBC points out that if measures other than spending, such as central bank actions, are taken into account, the ranking looks different.

Such significant government spending obviously has to be financed, and the BBC points out that “Countries like the US and Japan are also in a better position to finance new spending, since investor willingness to buy their bonds means they benefit from low borrowing costs”.

Luxembourg passed a €2.5 billion bond issue with negative interest rates to finance the fight against COVID-19 in April 2020 – a historic first. “According to the government, the markets’ reaction was positive: demand was reportedly much higher than the offer. Luxembourg’s investors reportedly showed solidarity,” reported news broadcaster RTL Today.